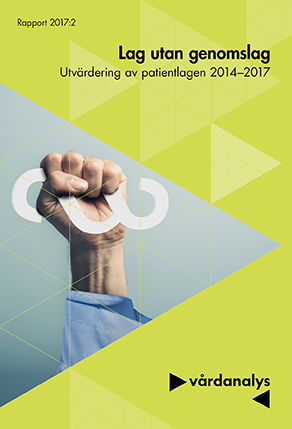 The Swedish Agency for Health and Care Services Analysis has been commissioned by the Government to monitor the implementation of the Patient Act. Monitoring is intended to shed light on whether, from a citizen and patient perspective, this legislation is having the desired effect. Monitoring has been carried out during the period 2014-2017. In keeping with this assignment, we have already published two earlier sub-reports. The first sub-report indicated the baseline position prior to the Patient Act coming into force and highlighted the actions which were implemented at the time. The second sub-report identified obstacles and success factors affecting the introduction and impact of the Patient Act. The following final report examines whether and how the Patient Act strengths the position of the patient and presents an overall picture based on the previous sub-reports.

Our main conclusion is that the patient’s position has not been strengthened since the introduction of the Swedish Patient Act.

It may seem unreasonable to expect results just two years after the act came into force. But most of the obligations have been in place for a considerably longer time, indicating that there has previously been a lack of compliance.

The outcome of our weight of evidence approach to the change in the patient’s actual position is illustrated in the figure below. The assessments are based on an analysis of statistically significant differences in patients’ experiences in 2016 compared with 2014. The provisions concerning the selection of assistance aids (part of Chapter 7 of the Patient Act) and personal data and certificates (Chapter 10) have not been dealt with in this report and are therefore not included in the assessment.

Our analysis also indicates that the patient’s actual position, seen from the patients’ perspective, has weakened in a number of areas. This applies to accessibility (Chap.2), information (Chap. 3) and participation (Chap. 5). One factor which probably affects all the results is that there is still a low level of awareness about the Patient Act. In the case of several of the provisions featuring in the Patient Act which we have examined, we can also see, based on international comparisons, that Sweden is low down in the rankings. This relates, for instance, to issues about information and accessibility and this has also been the case over time.

The proportion of people who are familiar with the obligations which the healthcare service has towards them, according to our survey, has not increased since the Patient Act was introduced. This is true for both patients and the public. The level of awareness of the law is also still low among healthcare staff.

Patients do not feel that their information requirement is being met

Patients feel that there is poorer accessibility to the healthcare service in different respects. Fewer patients feel that it is easy for them to get to see healthcare staff when required or that it has been easy to get in touch or gain access to treatment. Patients also think that efforts to achieve the targets based on the National Guaranteed Access to Healthcare in Sweden have eased of, mostly with regard to guaranteed visits in the primary care sector. This actual trend, seen from measurements of waiting times taken nationally according to the guaranteed access scheme, also indicates a worse performance in terms of achieving the targets for this period. Patients’ access to primary care can be improved through the extended opportunities which are now available to look for and get treatment online. Even with this possibility, we still cannot see how there has been a positive impact on accessibility overall.

Furthermore, a smaller proportion of patients feel that the healthcare service is seeking and welcomes their participation. Patients’ wishes to be more involved are also confirmed by other studies. Patients also think that they have been given a somewhat lower level of support by the healthcare service in adapting the self-care they provide to themselves to their individual needs.

The results from our patient survey indicate that a somewhat lower proportion of patients knew about the option for seeking outpatient treatment under a different county council. Among the patients who sought treatment under a different county council, there are, at the same time, significantly more than before who feel that they have received the practical help they need.

Analyses of the actual changes to treatment sought outside the county in the primary care sector and in the specialist outpatient sector also indicate that no major changes occurred after the Patient Act came into force.

Inadequate requirements affect the likelihood of a patient going to seek treatment under another county council.

Apart from the potential obstacles posed by the geographical, administrative and economic aspects, there is no easily available information which allows patients to be able to compare the choice of care available and its quality nationally. There is also a lack of clarity regarding the varying rules on referrals. There are still activities which require a referral, even though the county council does not say that they apply official referral requirements.